Discharge Student Loans in Bankruptcy – Is It Possible? To learn more, read on. 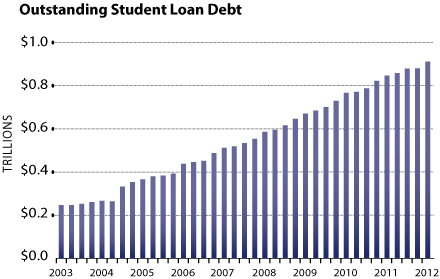 Is it possible to discharge student loans in bankruptcy?

With that in mind, it would seem that student loans should be viewed as dischargeable debts. After all, they’re listed in Schedule F along with other general unsecured debts like medical bills and credit cards. What makes student loans so… special? Why is there an exception for student loans? In law there are always exceptions, and unfortunately for college graduates with student loans larger than many home mortgages – they are afforded no relief in bankruptcy. If someone gets behind on their student loan payments, they can also look forward to wage garnishments and tax refund offsets – similar treatment to deadbeat dads who never pay child support. To understand why student loans are viewed differently we need to travel back in time.

Student Loans – The Back Story

On November 8th, 1965, Lyndon Johnson signed the Higher Education Act of 1965 which in part established the Guaranteed Student Loan Program (hereafter Program). A large component of the Program was designed to enable college students to have easy access to low interest rate loans. Under the Program, educational loans from various types of lenders such as banks, credit unions and educational institutions were insured by the United States Department of Education or by state agencies or nonprofit organizations and reinsured by the Department of Education.  If the student borrower failed to make repayments because of death, disability or discharge in bankruptcy, the lender was entitled to repayment from the federal government.

These loans – now fully backed by the Department of Education – were originally entitled to full discharge in bankruptcy. As you can imagine, the temptation was too great for many student debtors to resist and soon there was a perceived rise in recent graduates filing for bankruptcy. Whether or not there was a real rise in graduates filing for bankruptcy is debatable. Compared to today, wages were actually on the rise, college debt compared to income was relatively low, and job opportunities were much better. Still, the perception that bankruptcy was a relatively painless and inexpensive way to avoid repayment of educational debt persisted. Aside from contravening general public policy, these bankruptcies began to call into question the solvency of the Guaranteed Student Loan Program and its future viability.

The Bankruptcy Reform Act of 1978 added a provision which severely restricted the dischargeability of student loans. That provision, section 523(a)(8)currently provides that an educational loan is not dischargeable in bankruptcy “unless excepting such debt from discharge … would impose an undue hardship on the debtor and the debtor’s dependents.” To complicate matters, the Bankruptcy Code does not define “undue hardship” nor did Congress explain how to apply the new provision to determine when a hardship qualifies as “undue.” What is clear is that undue hardship is not a mere inconvenience, loss in standard of living, or temporary inability to pay, such as unemployment.

Finally, in 2005, the Bankruptcy Abuse Prevention and Consumer Protection Act was passed which lumped private student loans in with federal student loans as being non-dischargeable in bankruptcy.

Most recently, there has been a shift back in the opposite direction. Senator Dick Durbin (along with Mr. Whitehouse, Mr. Franken, Mr. Harkin, Mr. Reed and Ms. Warrent) introduced the following bill, which was read twice and referred to the Committee on the Judiciary: S. 114: Fairness for Struggling Students Act of 2013 The purpose of this bill is to undo the changes BAPCPA made to private student loans – essentially making them dischargeable again. Whether this bill will get past Committee remains to be seen, but it’s interesting there is support in Congress to head the other direction.

There are currently two tests that various courts of appeals have applied when determining what constitutes an undue hardship under section 528(a)(8). The first and most widely adopted is the three-part test in Brunner v. New York State Higher Education Services Corp., 831 F.2d 395,396 (2d Cir. 1987). It has currently been adopted by the 2nd, 3rd, 5th, 6th, 7th, 9th, 10th and 11th circuit courts. What this means is that if you live in Kansas – a 10th circuit state – the judge will be required to apply the Brunner test if you are looking to discharge your student loan debts.

The three-part Brunner test requires the debtor to prove:

(1)    That the debtor cannot maintain, based on current income and expenses, a “minimal” standard of living for herself and her dependents if forced to repay the loans; (2) that additional circumstances exist indicating that this state of affairs is likely to persist for a significant portion of the repayment period of the student loans; and (3) that the debtor has made good faith efforts to repay the loans. 831 F.2d 395, at 396

The other undue hardship test, adopted solely by the Eighth Circuit is called the “totality of the circumstances.” See Andrews v. S.D. Student Loan Assistance Corp. (In re Andrews), 661 F.2d 702, 704 (8th Cir.1981). I may discuss it in the future, but since it is out of step with most of the country I am only mentioning it now.

How does this apply to your situation?

Everyone’s situation is unique and will need to be evaluated by an attorney. Generally speaking, if you are permanently disabled you may wish to file an adversarial hearing to determine the dischargeability of your student loans. At the adversarial hearing you will be asked to provide evidence of the nature of your disability and your ability to pay it in the future. There is a presumption that you can pay, so the evidence will have to overcome this presumption. If you pass the Brunner test, the judge has discretion to dismiss your student loans in bankruptcy.

Aside from filing an adversarial hearing in bankruptcy, you may be able to get your student loans dismissed based on permanent and total disability. A new, less restrictive discharge standard just went into effect on July 1st, 2010. To quote directly “As of July 1, 2010, this discharge requires certification from a doctor that you are unable to work and earn money because of an illness or injury that is expected to result in death, last for a continuous period of not less than 60 months or can be expected to last for a continuous period of not less than 60 months (5 years). This is more restrictive than many other federal disability programs, but as of July 1, 2010, it is less restrictive than the prior standard.  In addition, veterans who have been determined by the Secretary of Veterans Affairs to be unemployable due to a service-connected condition qualify for this discharge without having to provide additional documentation from a doctor. The Department has released a letter with more information for veterans applying for this discharge.”

All federal loan borrowers are eligible for this discharge. For more information, including a downloadable self-help packet, I strongly recommend going here.

If you have questions about student loans and bankruptcy please give us a call at 785-727-7700 for a FREE Consultation over the phone or in person or you can email us now.

Chris W. Steffens, Attorney at Law is a Bankruptcy Lawyer serving Topeka, Lawrence, Overland Park & Kansas City KS. I’ve filed hundreds of cases and spent years honing my practice at one of the largest consumer bankruptcy firms in Kansas. I bring with me my exceptional knowledge and experience and I treat every client with the respect and care they deserve.